The Life to Come (2017), to date, is arguably the best novel Michelle de Kretser has written. Consisting of five narratives that interact with one another through shared threads, The Life to Come is concerned with the lives of a group of Sydneysiders: persons who cross one another’s lives, and others yet who play marginal roles or make occasional appearances. It is a well-thought through, intricately-crafted work with a social concern, psychological depth, and – at times – a philosophical preoccupation. 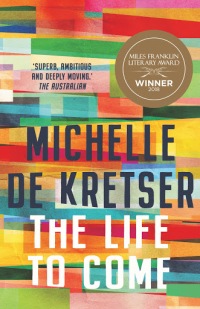 In addition to its being anchored in suburban Sydney, the blurb of The Life to Come promises us settings in Sri Lanka and Paris. As such, the third part of the novel, ‘The Museum of Romantic Life’, is set in Paris where the writer Pippa Reynolds – in many aspects, the closest we find in the book to an overlapping central character across narratives – spends time authoring a book. Where Sri Lanka is concerned, there are two socio-political references to the island nation – initially, in the second section, ‘Ashfield Tamil’, and in the novel’s concluding ‘Olly Faithful’. In Ashfield Tamil, the central thread is preoccupied with two men of Sri Lankan lineage – one her grocer, and the other, her lover – who become to Cassie, a PhD student, two overwhelming presences, if for a fleeting moment, in her life. The grocer, a onetime Tamil postmaster from Jaffna, runs a typical ‘Sri Lankan style’ shop in Ashfield from which Cassie purchases to make ‘authentic’ dishes for her partner Ashoka (Ash). Of Sinhalese parentage, Ashoka Fernando has very little ‘authenticity’ about him as a Sri Lankan. Having been largely brought up outside of Sri Lanka, except for a five year spell where he was educated in a Colombo International school, Ash carries but a fragmented memory of his Sri Lankan childhood. Cassie, an Australian woman whose education includes theory on identity and displacement brings within the same reference frame the ‘Ashfield Tamil’ and Ash the boyfriend, who are otherwise divided by ethnic and politico-historical circumstances.

The ‘Ashfield Tamil’ section ends with a confessional note written by Ash, in which he refers to the 1977 anti-Tamil riots in Sri Lanka (pp. 79-87). As a child who had been sent to spend a few days in Anuradhapura with his physician father, Ash becomes a secondary witness of this (largely under-represented) organized attack on the ethnic Tamils of Sri Lanka. Through proxy and insinuation, Ash learns of acts of arson, pillaging of Tamil property, killing and so on – which includes the death of a deformed boy whom, during Ashoka’s drives to the father’s office, he had seen selling lottery tickets on the roadside.

The ‘Ashfield Tamil’ section, in certain ways, is predictable and cliched. The Tamil grocer’s being from Ashfield to dramatically correspond with Ashoka’s Caucasian-savvy abridgment notwithstanding, the narrative exposes several other cavities that take away from its strength. The fact that Ashoka has a suppressed ‘Sri Lankan violence tale’ to tell – and that that story will be told in short – is already a foregone conclusion. When the 1977 pogrom is presented, the imagery and the characterizations feed off overused descriptions of the violence. For example, the reference to the south-bound Jaffna-Colombo train being attacked by mobs at Anuradhapura station is an exhausted and hacked set-piece. Ashoka’s coincidentally being in Anuradhapura to witness the violence  is as forced as his father’s hurried send off of the son to Colombo (in the care of a hospital clerk) a day after the riots. In a passage which can be best understood as being dictated by de Kretser’s need to spell out the actual violence, Ashoka’s father makes the son travel in the train – a relatively uncertain option in the context of things. Here, young Ashoka’s travel companion reveals him the brutal murders carried out by the mob the previous day in barbaric detail (84-86).

In contrast to Ashoka’s brief appearance and his retrospective account, the story of Bunty and Christabel in ‘Olly Faithful’ presents a powerful, socially-penetrating, psychologically-rich rendition of modern day companionship, ageing, and isolation. With Sri Lankan roots, Bunty and Christabel first meet as neighbours and school fellows in immediate post-independence Ceylon. Alfrieda ‘Bunty’ Sedgwick is fourteen, and Christabel is twelve. The story is narrated through Christabel’s perspective, and the early passages have to do with post-independence complexities of the island nation which, for 450 years, had been ruled by European colonialists. The prospects of the flag-bearers of the colonial rule begin to gradually splinter in the face of new nationalism. The 1950s’ exodus of Burghers and other established families of Colombo’s classed English-speaking milieu results in a growing isolation in Christabel’s life. The Sedgwicks, too, leave – but, Christabel’s father decides to ‘continue’: a dogged decision amidst growing social and cultural alienation. After his death, the only daughter is pushed to a hand-to-mouth existence until – out of the blue – Bunty writes to her from Australia, inviting Christabel to move in with her.

The story of Christabel in Sydney is dividable into two sections – her life with Bunty, and the connection she develops with Pippa Reynolds, the writer who lives in the partitioned other half of the house. Overall, ‘Olly Faithful’ is a complex section to write, and de Kretser’s close engagement with the thinking that levers its powerful execution is commendable. However, the narrative provides a bleak and obscure timeline which, at times, challenges the general shape of the narrative flow. Incidents and episodes – from innocuous encounters to memorable exchanges – pack into a narrative frame that is internally confused of time and space.

If at all, de Kretser gives only a few approximations which, in the long run, mean very little. For instance, adjacent to the passage where Christabel is introduced to the reader as a twelve year old (p.274) a reference is made to her father’s lecture on ‘The Romantic Imagination’ being interrupted by Sinhala nationalist students who demand “Sinhala Only!” (p. 277). In spite of its presence among nationalist lobbies, the Sinhala-Only demand became a political slogan only during the run up to the 1956 general election. Taking a cue, this encourages us to situate Christabel’s birth between the mid-1940s and 1949. This, in turn, corresponds with her being in her mid-60s, when the narrative comes to its end in Sydney, presumably in the late-90s or early-2000s. Similarly, Christabel’s arrival in Sydney – in her mid-30s – can be dated to have taken place between 1974 and 79. In one of her early picnics among Sydney friends, someone makes a reference to Sri Lanka’s having been called “Ceylon until 1972” (p.290). The warped timeline frustrates a reader intending to map the social and political indicators on which Christabel’s childhood experiences are hinged. This, in a context where the post-colonial environment, its proponents and dissenters are a central discussion space in Sri Lankan narratives; and, indeed, narratives of a postcolonial bearing.

An interesting contrast can be found in de Kretser’s well-crafted maps of Sydney (and, for that matter, Paris) and character-less references to Sri Lanka’s Anuradhapura and Colombo. The former is complete with classifications of suburbs, street details, demographic specifications, while not a single street, place, or suburb is captured in the Sri Lankan digression. Other than the not-very-original reference of Christabel’s being employed in a Cinnamon Gardens speech and drama school, the geography of her childhood and youth is more or less a complete blank.

OTHER BLOGS: in love with a whale

On ‘Love and Protest’.

Purpose, Function and Role: Literature without Borders, and the Bordering of Literary Awards.