Kaviru Samarawickrama’s Walking in Blind demonstrates an individual’s attempt at working-through an emotionally-shattering and traumatic past, while attempting reconciliation between that past and the present. It is arranged in four movement, which loosely represent a transition in progress: one that begins with acute trauma – where, the persona is struggling with her surroundings – and gradually builds up through a resurrection of the self. The palpable linearity of this progressive track – the sense of moving forward towards a definite, albeit positive, end – makes the line up a bit tedious and predictable. But, perhaps, from an authorial perspective – and given the deeply psychological preoccupation of the poetry body – this gradual build is both a demonstration and a protest. 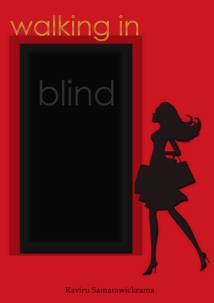 Almost all poems in Walking in Blind are personal, and stem from a sense of displacement and emotional numbing. The poetry can be proposed to capture a three-part engagement where the persona and her past are at play: one, an engagement with the self, which is often compounded by the second, a negotiation with the world that surrounds her, and a third – an intense externalization against the memory of an ‘ousted other’: a former lover who is also the author of trauma and breakdown. Featured in some of the more intense, emotionally-charged pieces, this ‘ousted other’ becomes the departure point in a journey of self-recovery and retrieval of displaced confidence and esteem. This journey of reawakening requires atonement and working-through. On the whole, the poetry becomes both the act and the product of that ongoing process of working-through: the externalization and revision through which the persona/poet attempts to reconcile her past with the present/future. .

The ex-lover often occupies a center-to-margin space, but immediately and unequivocally becomes the navel of gravity. He is often projected as a breeder of insecurity and self-loathing and an agent who undermines the narrator’s body and person. In a poem (“Girls Never Stop Play Dress Up”) that builds up as a negotiation with the self and the surrounding (the home, the mother and so on), the lover makes a sudden, brief appearance and tilts the lens-focus in his direction. As the one who fails to understand the narrator – the one who lacks empathy or the effort – he offsets and upsets the symmetry of the piece. In another poem,(“Home is Where the Heart Is”), he is the insidious presence who irks the conscience of the narrator – a player and comforter of women other than her; and who is insinuated as having a duplicitous role. In “You Can’t Tell Anymore”, he is pictured in a bar discussing other girls with his friends. Subtle ploys such as where the narrator refers to her lover’s preference for cuss-play while at the same time being inapt in appreciating her love of colour are crucial as subtle moral judgments of the ‘ousted other’. In “Innocence”, the depth of antipathy is dramatized in the following words:

He suffocated me.
He looked down on me and said you are nothing.
He took advantage of what I didn’t know…
… While I sat there as tears fled down and hit the floor
I secretly bled inside from the sharpness of his words. (50).

This, perhaps, is one of the most powerful protests – charged with expiring energy against emotional betrayal and humiliation: a ballast emerging from a voice regained, and a confidence restored.

Filled with references to dressing up, lipstick, rooms, toys, mirrors, Kaviru uses all that is on the surface ephemeral and “child-like” to build a poetry body that at times digs deep into our own consciences and convictions. The same hand trains a line of thought that reflect on (or, on what ought to be) the purpose and end of life:

In life, the purpose to live isn’t to be protected
But to be the saviour to the ones you love.
And times will appear when you cannot save others,
When your hands are left with no weapons.(90)

But, from such pensive and meditative philosophizing, Kaviru snaps into bouts of anger, frustration, and confusion in poems like “Dug Deeper, Myself”. “Sometimes I wonder why I pretend to be strong and hide my tears,” she writes:

In reading Kaviru Samarawickrama, a concern for caution was the undeniably prosaic quality of her work: her writing, quite frequently, being more prose-like than poetic. But, in the context of the overall work, and with the knowledge that Kaviru has an influential open-mic background, this is a premise that I wish not to follow through. In addition, the emergence from trauma and shattering experience and their literary representation cannot (and should not) be reduced within a conventional poetic.

Two of the few reviews to date on Walking in Blind were carried by OnlineBookClub.org featuring a Sun_shi_nii and a psychopathycathy. They both give Kaviru 3 stars on a scale of 4 (75% is a good score for any poet), and hails her for taking “readers into a world of in-depth grief where a girl tries all the best she could to show to the world how strong she really is” (Sun_shi_nii) and for provoking in depth thought on depression from psychological and sociological perspectives (psychopathycathy). Sun_Shi_nii endorses the latter assessment by agreeing Kaviru’s poetry to be provocative of “melancholy, depression, and anxiety” yet being “thoughtful and sweet”. My personal feeling (and, perhaps, I may be wrong) was that these reviewers use words such as ‘melancholy’, ‘depression’, and ‘anxiety’, in a loose sense, as we do over tea: a usage born out of nostalgia for the GCE Literature classroom. The use of such terminology can, at one level, be counter-productive as they define and limit the poet and the writing to a convenient capsule – a freezing that would serve ill the journey Kaviru Samarawickrama attempts to draw attention to.

What is memorable in Walking in Blind is the energy of revival and the process of working-through of overcoming past trauma. The work has cathartic pretensions and deeply-moving, powerful moments of a varied pitch and throw.

OTHER BLOGS: in love with a whale

On ‘Love and Protest’.

Purpose, Function and Role: Literature without Borders, and the Bordering of Literary Awards.